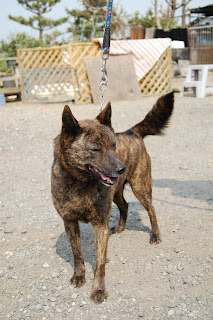 The Kai Ken is considered by some to be the most ancient, and purest dog breed in Japan. It was developed in the isolated district of Kai (Yamanashi Prefecture) as a hunting dog. Kai's were used to hunt everything from boar, deer, bear, to pheasants. This breed was designated a natural monument in Japan in 1934.

Kai are also known as the Tora-inu or Tiger dog because of their brindle coloration. They come in three shades of brindle, Aka-tora (red), Chu-tora (medium), and Kuro-tora (black). The majority of Kai seen today are Kuro-tora primarily due to their popularity in the show ring. The resulting decrease in Aka-tora bloodlines has been noticed, and efforts are under way to preserve them.

The Kai is a medium sized dog with a wedge shaped head and prick ears. The tail may be curled over the back, or carried in a sickle position.
Posted by Kato at 12:06 PM

LIVING IN JAPAN WITH KAI KEN

Look closely though and you will find a prefecture filled with amazing variety. Swinging south around Tokyo Bay you'll see everything from Disney Land, to Makuhari's perfectly aligned skyscraper-filled grid, to the beautiful beaches and crystal clear ocean of Tateyama at the tip of the peninsula.

Less than an hour commute from Tokyo to the northwest, an hour away from great surf to the east, and an hour south to mountains filled with wildlife, it's all here in Chiba where I've lived for the past 10 years.